Imports to China increased by 28.1% year-on-year in July 2021, marking the tenth straight month of expansion in inbound shipments. However, it was less than market expectations of 33%, according to tradingeconomics.com.

The reduced demand comes as China battles the latest COVID-19 outbreak in the country, slowing down manufacturing.

Meanwhile, purchases grew for refined products, including for copper ores and concentrates by 5.1%, and for steel products by 649.03%.

The latest data from China comes amid copper supply fears, following a worker dispute at a key mine in Chile that threatened to stump production last week.

Escondida’s workers had threatened to go on strike, after insisting their demands for a one-off bonus to recognise their work during the coronavirus pandemic had not been met.

However, the main workers’ union in the area announced on Friday it had reached an agreement with Anglo-Australian mining giant BHP to avoid industrial action.

In 2017, Escondida workers staged a 44-day strike, which was the longest ever in the Chilean mining industry. During the dispute, BHP lost $740m – and provoked a 1.3% fall in the country’s GDP.

Ole Hansen, head of commodities research at Saxo Bank, told Capital.com that since Friday, the mood in industrial metals, especially copper, has further deteriorated from the latest batch of weaker than expected data out of China.

“Copper’s recent and price-supportive focus on potential supply disruptions in Chile eased as BHP workers at the Escondida mine, representing 5% of global output, voted to accept a final wage proposal.

“In recent weeks, the threat of supply disruptions have offset surging COVID-19 cases and worries about a Chinese slowdown hitting demand. With the risk of disruptions fading the market could, just like oil, see a period of sideways trading while the current virus outbreak is being brought under control,” he said.

Hansen also explained that while resistance has been established above $4.40 a pound, support has been equally strong below $4.20 a pound. “Overall, however, we still see further upside with the price of High-Grade copper eventually reaching $5 a pound, but perhaps not until 2022 when continued demand for copper towards the green transformation and infrastructure projects increasingly could leave the market undersupplied," he added. 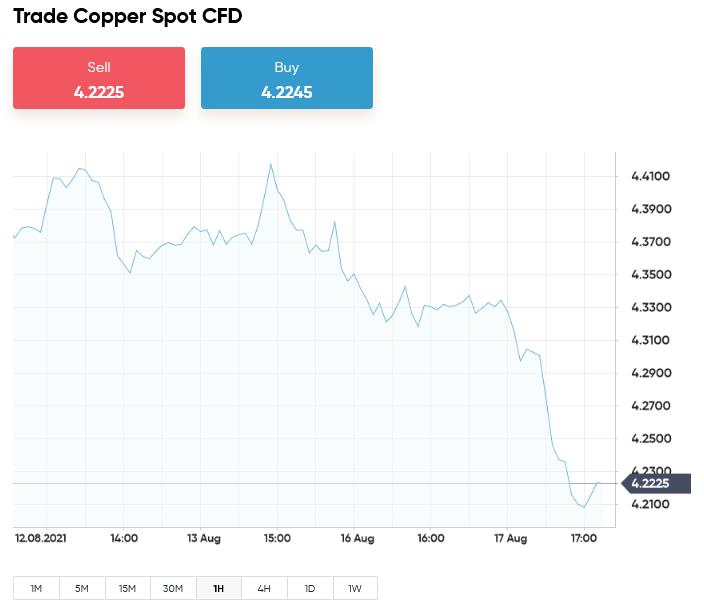