(Reuters) – Copper analysts are reviewing their price forecasts for the red metal after simultaneous disruptions in two key sectors in China that together make up more than half the country's copper demand.

The collapse of a major Chinese property developer that has ignited debt worries for the construction sector and a coal shortage that has cut power supplies to manufacturers stack up as bearish factors for copper over the near term, analysts said.

China is the world's biggest user of copper, accounting for around 50% of global consumption, so a shake-up to its copper market balance has global repercussions.

Potentially offsetting that downbeat short-term outlook forecast for robust copper demand as part of the global energy transition for everything from charging stations to solar plants. Copper consumption by green energy sectors globally is expected to jump five-fold in the 10 years to 2030, data from consultancy CRU Group shows.

"Bearish short-term, bullish long-term is definitely a good way to sum it up. The longer-term demand dynamics are great. But short-term cyclical demand is clearly a worry," said Colin Hamilton, managing director at BMO Capital Markets. 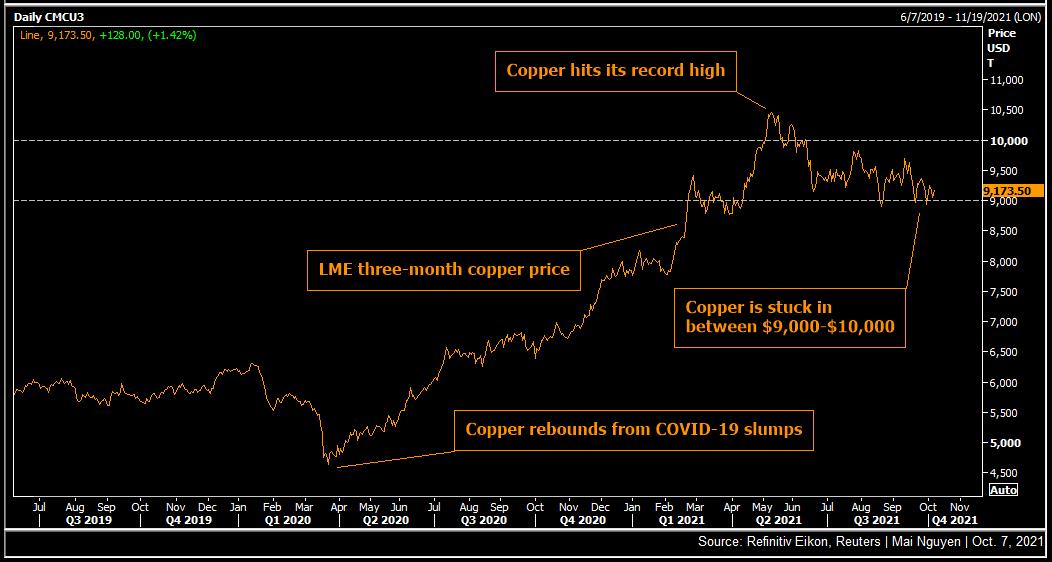 Benchmark LME three-month copper prices have been largely locked in a narrow $9,000-$10,000 per tonne trading range for the past four months, but Hamilton sees them dropping by around $1,000 a tonne from now, or by more than 10%, due to weaker near-term use in China.

Once China’s top-selling developer, China Evergrande Group is facing one of the country’s largest-ever debt restructurings with more than $300 billion in liabilities.

The possible collapse of such a high profile builder and borrower has raised fears of contagion here to the rest of China's vast property sector, a massive copper consumer that could be hobbled by any enduring credit crunch.

At the same time, prolonged power curbs in China here have raised uncertainty over how constrained manufacturing will become, and for how long, after factory activity unexpectedly fell in September.

Machinery, air conditioning, fridges and other consumer durables combined account for 42% of China's end-use of copper and construction takes up 22%, CRU data shows, while power accounts for 22% and transport 8%. 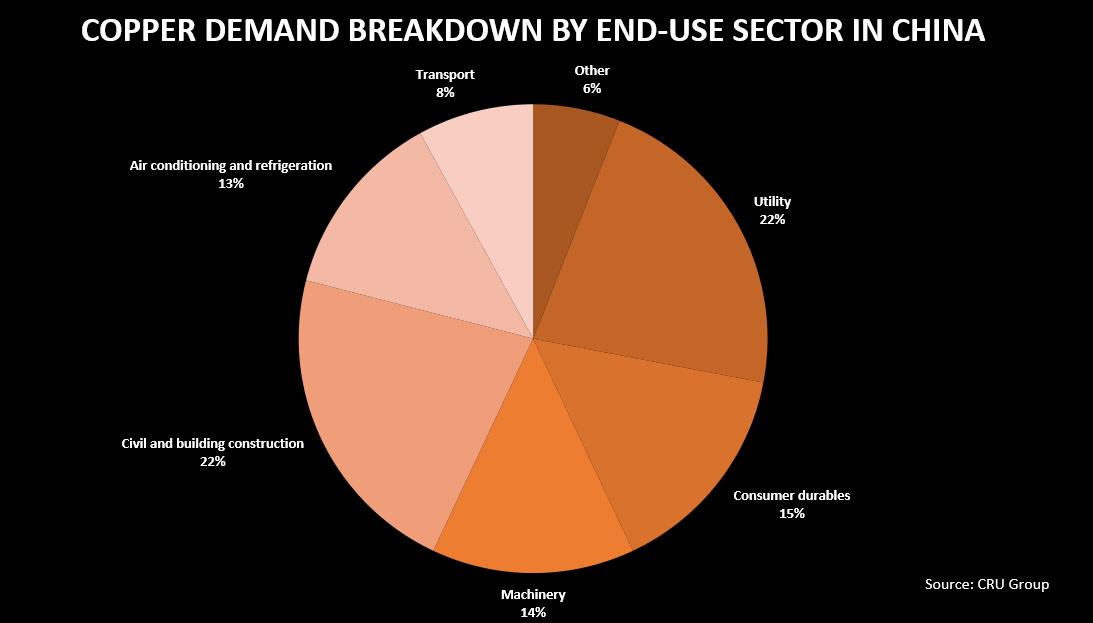 While most analysts agree on the softer near-term demand outlook, some are still waiting for evidence of consumption cuts before adjusting forecasts.

"To corroborate the idea of demand destruction in copper (by the power curb), we will have to wait for more data and evidence after the market returns from holidays," said ING analyst Wenyu Yao, referring to China's Oct. 1-7 Golden Week break. 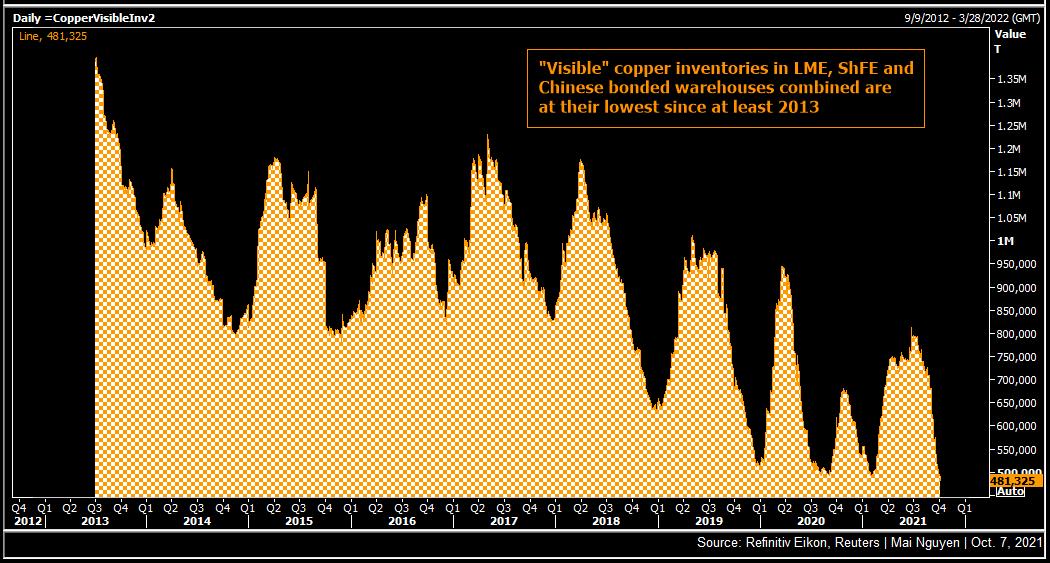 Shanghai Futures Exchange warehouse inventories have dropped some 80% since May to their lowest since June 2009, taking the "visible" stocks, which include inventories in LME and Chinese bonded warehouses, to a record low, Refinitiv Eikon data showed.

"What's been clear for investors is the multiple-year low stocks in the onshore market which serves as part of the micro positivity," Yao said. 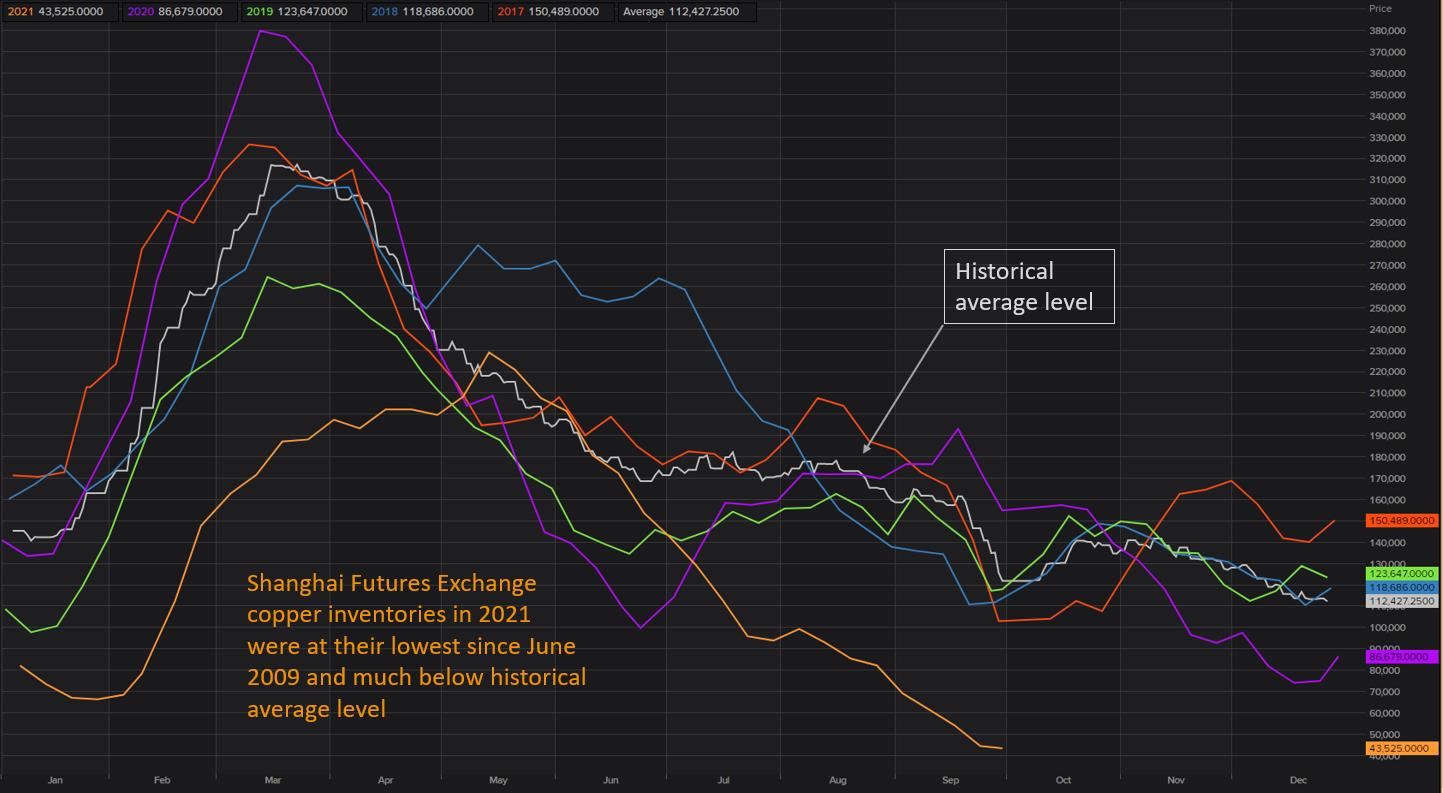 Indeed, any near-term shake-out in copper prices is likely to be viewed by some as a buying opportunity rather than a signal of enduring market weakness.

"We are still strong believers in a copper super-cycle, and we see copper presenting a strong buying opportunity for medium- to long-term investors over the next 3-6 months," Citi analysts said.