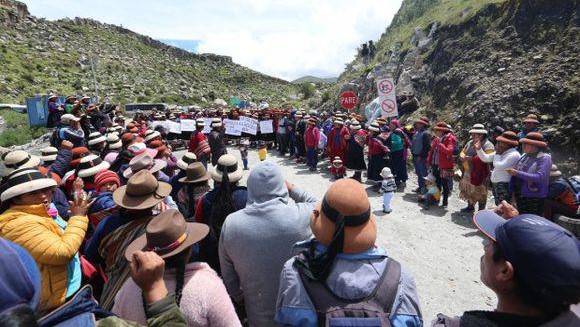 Peru's top mining lobbying group on Thursday slammed the government as "erratic and biased" against the sector as one of the country’s largest copper mines faces protests and a looming production shutdown.

Peru is the world’s No. 2 producer of copper and sliver, and mining is a key source of tax revenue.

But new protests have hit a number of mines. The protesters accuse the mines of harming the environment and local communities since leftist President Pedro Castillo took over the Andean nation in July.

MMG Ltd’s Las Bambas copper mine is planning to suspend production next week due to a road blockade that started on Nov. 20. A meeting between Chumbivilcas province, which is organizing the protest, and the mine failed to reach an agreement on Tuesday.

"The conduct of the representatives of the (mining ministry) has been erratic and biased, confirming that Las Bambas is being blackmailed by leaders who demand advantageous contracts,” the National Society of Mining, Oil and Energy said in a statement.

Chumbivilcas and Las Bambas reached a preliminary agreement in October for residents to receive jobs transporting copper on a dirt road through the province. But the negotiations stalled over the exact number of jobs, and residents blocked the road again in protest.

The mining ministry did not immediately reply to a request for comment.

The mining corridor, as the road is known, has been blocked for over 400 days since Las Bambas began operations in 2016 by groups that allege the dust is affecting their crops and cattle.

Las Bambas has said a long-term solution to the protests would be for the government to build a rail link, although the cost estimate is significant at over $9 billion.