New Lme Stocks Squeeze Is Creeping Up On Doctor Copper 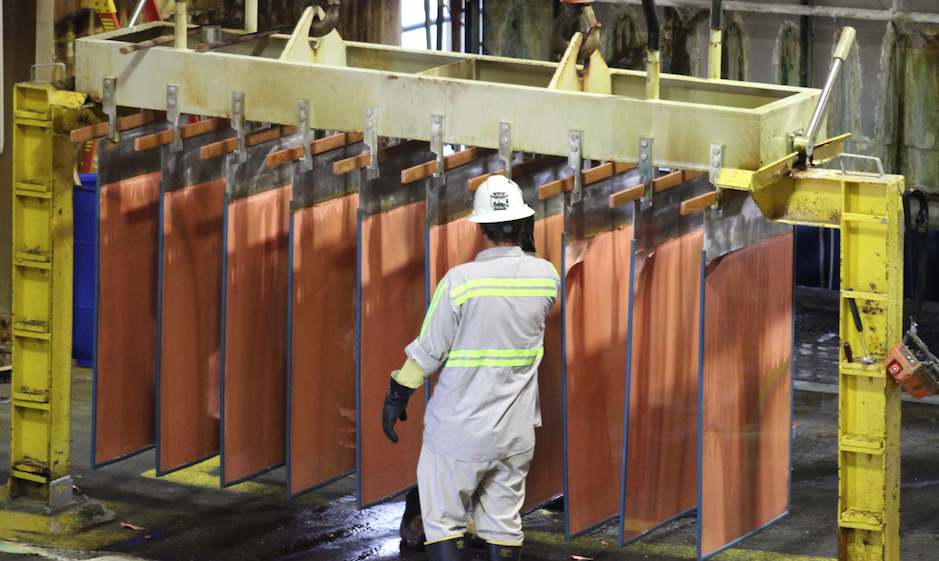 Copper cathodes at Capstone's Pinto Valley mine in Arizona. Image from Capstone.

(The opinions expressed here are those of the author, Andy Home, a columnist for Reuters.)

The copper market has been subdued since the start of the year, the price trapped in a tight trading range with volumes and open interest sliding across all three global exchanges.

'Doctor Copper' – the nickname for a metal whose price is often seen as a reflection of the world's economic health – has been out of favor with investors since October, when the London Metal Exchange (LME) stepped in to restrain a market in danger of disorderly meltdown.

LME time-spread caps remain in place, an extra regulatory dampener on a market that is fundamentally unsure of its next move.

Analysts are generally looking for the copper price to soften over the course of this year on the back of slowing growth impetus in China, the world's biggest copper user.

Even bears, however, are wary of the potential for another upside spike before then amid continued supply chain disruption and low inventory.

The wariness is justified because LME stocks are falling again in a slow-motion re-run of events leading up to last year's super squeeze.

Tuesday’s LME stocks report showed only a modest change in exchange copper inventory. The headline figure slipped by 100 tonnes to 79,925 tonnes with the inflow of 1,400 tonnes at Hamburg offset by draws from there and other places.

Much more interesting was the cancellation of 2,500 tonnes at Rotterdam in preparation for physical load-out.

That's something of a magic number for the copper market right now.

Exactly the same amount was cancelled at Rotterdam the previous three days. Indeed, it is the twelfth 2,500-tonne cancellation at the Dutch port in a sequence stretching back to the middle of January.

The only days copper hasn't been cancelled at Rotterdam have been those when the action has switched to Hamburg at exactly the same rate of 2,500 tonnes per day.

A handful of other LME warehouse locations have also been in action but it’s this clockwork cancellation of European copper stocks that is starting to tighten exchange availability again.

The early-year rise in headline LME copper stocks has gone into reverse and they are now down by 10% on the start of January. The amount of copper on warrant has fallen to 53,600 tonnes, the lowest since November.

That's still some way off October’s extreme low of 14,150 tonnes, a liquidity crunch that sent the LME cash premium soaring to an unprecedented $1,103.50 per tonne.

But the recent cancellation pattern echoes that leading up to October’s mayhem, just with the daily volume dialled down from 10,000 to 2,500 tonnes.

Low inventory is not just a feature of the London market. Shanghai Futures Exchange (ShFE) stocks stood at an even more depleted 40,359 tonnes going into the Chinese new year holiday period.

Total copper inventory across all three exchanges – LME, ShFE and CME – was 200,402 tonnes at the end of January. It fell by 73,000 tonnes last year, the fourth consecutive annual decline.

LME shadow stocks have been disappearing even faster. The amount of copper being stored off-market but with the option of LME delivery slumped by 115,000 tonnes over the first 11 months of 2021. The total at the end of November of 18,945 tonnes was the lowest since the exchange first started publishing these monthly figures in February 2020.

The depletion of global exchange stocks speaks to the strength of demand, not least from China, where imports remain robust.

The optics may not be quite as bullish as they seem, however, if the drain on visible stocks is at least in part down to supply-chain hoarding.

Trade house Trafigura admitted it was one of the players behind last year’s LME stocks clear-out but it won’t be the only merchant wanting to ensure it has sufficient inventory to meet customer demand in a world still in the grip of a rolling shipping and logistics crisis.

As many consumers experienced during pandemic lockdown, low stocks can trigger a rush to grab whatever’s left, whether it be toilet paper or bottled water.

Or copper. LME copper stocks give every appearance of experiencing a second grab-it-while-you-can impulse wave.

And particularly in Europe. On-warrant stocks at Rotterdam have been reduced to just 2,400 tonnes and those at Hamburg to 5,300 tonnes.

Calm before the storm?

LME three-month metal continues to oscillate sideways in a $9,500-$10,100 range. Time-spreads are constrained. There is still a premium for cash metal but as of Monday’s close it was valued at a modest $29.25 per tonne.

The lack of action has seen speculators depart for hotter markets both in China and the rest of the world.

Funds remain marginally net long of the CME copper contract to the tune of 19,256 contracts as of the most recent Commitments of Traders Report. Bearish short positions have barely changed over recent months with the net positioning reflecting only small changes in bullish bets.

Everyone, it seems, is waiting for the copper price to make up its mind which way to break out of an increasingly stifling range.

A deteriorating macro picture, first and foremost in China, where manufacturing output growth is in danger of stalling, is why most analysts are looking for lower prices this year.

But the clockwork cancellations are keeping the bears at bay and the longer they continue, the greater is the potential for Doctor Copper’s snoozing to be rudely interrupted.