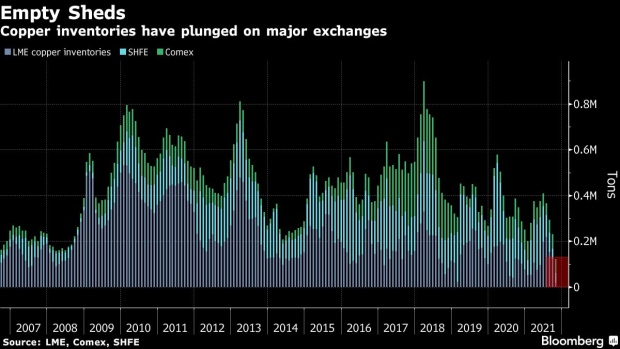 Copper wire rod in a storage facility following manufacture at the Uralelectromed Copper Refinery, operated by Ural Mining and Metallurgical Co. (UMMC), in Verkhnyaya Pyshma, Russia, on Thursday, May 20, 2021. A rebound in the world’s largest economies as the vaccination against Covid-19 rolls out is stoking demand for metals, food and energy when supplies are still constrained, creating short-term shortages. Photographer: Andrey Rudakov/Bloomberg, Bloomberg

(Bloomberg) — For months, the copper market has been caught in a tug of war between steadily shrinking supplies on one side, and an increasingly strained global economy on the other.

This week, the rope snapped.

Buyers on the London Metal Exchange, caught off guard by a sudden emptying of available copper in its warehouses, drove spot prices to record levels over futures Monday, prompting the exchange to take emergency measures. Trafigura Group, which Bloomberg reported was responsible for much of the withdrawals that sparked the wild moves, said it ordered metal to ship to customers who need it in Europe and Asia — supporting the argument that supply really is tight.

Read more about the LME squeeze and how it played out

By Thursday, copper was moving in the opposite direction. Futures tumbled by the most in four months, dropping with other industrial metals as investors focused on the potential hit to demand from weakness in China’s economy and the looming debt crisis at China Evergrande Group.

For anyone looking for clues on the world’s economies, changes in the supply and consumption of copper can provide valuable insight into how much factories are producing and consumers are buying.

The metal's vast array of uses in all corners of manufacturing, construction and heavy industry mean that the market is highly sensitive to shifts in economic activity. And as the biggest consumer and producer, China is particularly key for copper.

Traders like Trafigura have been saying for months that the tight supplies could help push copper prices to fresh records. On the other hand, some investors and banks have turned on copper, as the threat of power shortages and factory slowdowns from the global energy crisis cast a pall over the outlook and weighed on prices.

It’s hard to overstate the drama that played out on the copper market this week, and while inventories have ticked up a little in recent days, they remain at critically low levels. It’s not just the LME, supplies have shrunk too on rival bourses in China and the U.S.

So is the world as short of copper as the LME squeeze would suggest?

The first key point is that most of the world’s copper doesn’t actually pass through exchange warehouses — factories source their metal directly from producers or traders in long term contracts.

However, the reason that exchange inventories are so low in the first place is that supply from smelters has been falling badly short of demand, and power constraints in China are only adding to the problem.

That, combined with buoyant demand as economies seek to emerge from the pandemic, has drained stockpiles throughout the supply chain, with consumers’ yards and off-exchange warehouses also running low. At the same time, shipping delays and other logistical hurdles make it increasingly difficult to get metal where it’s needed.

Ultimately, the copper market remains physically tight, though it probably isn’t as strong as the substantial drawdown in LME inventories would suggest, Duncan Hobbs, head of research at metals trading house Concord Resources Ltd, said by phone from London.

With logistical problems, shortages and rising prices roiling the world economy, the question for traders is how much that will crimp demand for raw materials like copper. China’s economy slowed rapidly in the third quarter under the stress of a property slump and electricity shortages, while inflationary pressures are mounting around the world, squeezing both consumers and manufacturers.

For now, though copper demand in China has weakened, "supply has even weakened more," said Eric Liu, head of trading and research at ASK Resources Ltd. Elsewhere, traders say demand in Europe and the U.S. is still holding steady for now, and the logistical bottlenecks that have snarled global supply chains show no signs of letting up.