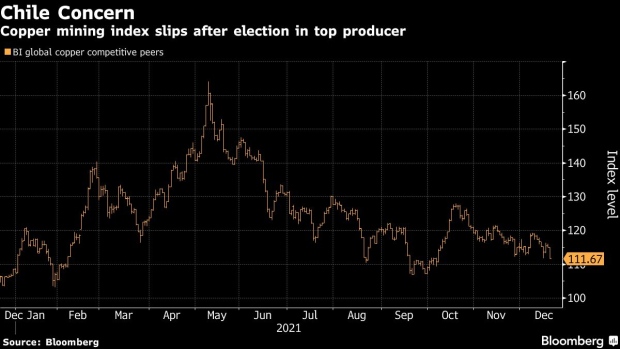 Boric won by a larger-than-expected margin, giving him a mandate to push for raising taxes on the rich and mining industry, dismantling the country's private pensions system and boosting social services.

While the political shift isn’t likely to have immediate supply impacts, a slowdown in permitting or higher costs imposed by the government could slow investment in capacity to produce copper, a metal seen as key to the energy transition. That could send prices back up to record levels seen earlier this year.

"Copper and lithium miners will naturally be in the crosshairs, particularly with both commodities at or close to record prices, while we would expect a weakening of the Chilean peso," BMO Capital Markets analyst Colin Hamilton said in a note.

A gauge of global copper miners fell to the lowest since early October, while copper for three-month delivery edged higher on the London Metal Exchange.

In the meantime, Boric's election can be viewed as positive for copper producers outside of Chile in the medium term, according to Hamilton. Any additional delays to potential projects as they wait for approval while the new government push new legislation through Congress could add to copper supply issues.

The BI Global Copper Competitive Peer Group index of producers fell as much as 3% on Monday, led by those with large copper exposure in Chile such as Lundin Mining Corp. and Antofagasta Plc. LME copper was up 0.3% at $9,463.50 a metric ton as of 11:34 a.m. in New York, while all other metals were lower.