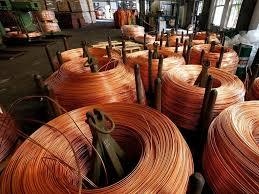 BEIJING: China's copper imports fell for a third straight month in June, customs data showed on Tuesday, as high prices and slowing manufacturing growth weighed on demand in the world’s top consumer of the metal.

"Due to high copper prices, imports were low as Chinese demand in Q2 was weak year-on-year," said Tianyu He, a copper analyst with CRU Group. “Also the closed arbitrage window limited trading activities.”

The market will start getting used to high prices and place more orders in the second half as demand is good, he said.

Growth in the manufacturing industry, a key user of the metal, dipped to a four-month low in June on higher costs of raw materials and a COVID-19 outbreak in the major export province of Guangdong, although construction sector activity held steady.

Last year’s run of bumper shipments began in June as Chinese demand rebounded strongly from the pandemic, sending copper prices in Shanghai well above those of London and opening an arbitrage play favouring imports.

The arb has mostly been closed in recent months as London copper hit a record of almost $10,750 a tonne in May, reducing Chinese consumers' appetite for overseas metal and pushing up copper inventories in Shanghai bonded warehouses to a near-two year high of almost 440,000 tonnes.

Imports of copper concentrate, or partially processed copper ore, were 1.67 million tonnes in June, customs said, the lowest level since August 2020. The June imports were down 14.4% from 1.94 million tonnes in May and up 5% year-on-year.

Meanwhile, China's exports of unwrought aluminium and aluminium products were 454,397 tonnes in June. That was up 3.5% month-on-month and 28.3% year-on-year.

In the first half of the year unwrought aluminium and aluminium products exports rose 10.7 % to 2.62 million tonnes.