Copper prices are down in September, on track for its sixth monthly decline, and a near-term reversal looks unlikely. While speculators can always drive prices higher on anything from improving economic indicators to shifting central bank rate hike bets, copper is a commodity. Its price is driven largely by supply and demand. Looking at the inventory data for the London Metal Exchange (LME) paints a bleak picture of the price outlook. Inventory has risen since early September.

Canceled warrants as a percent of total inventory dropped from 49.75% on August 30 to 6.73% on September 27. That drop occurred while inventory was rising, meaning that inventory was increasing at a faster pace than the demand (canceled warrants) for that copper. That effectively represents lower implied demand for copper. While situations are unique, historic trends that share similar behaviors bode poorly for the price outlook (as shown in the charts below).

So, why weren’t prices able to sustain upward price action in August? Those wanting to pull copper inventory out of the London Metals Exchange warehouse started to fall sharply in late August, with that trend continuing throughout September. As demand fell amid rising recession fears, it helped total stocks rise, which further pressured prices. Falling demand and rising inventory levels are a recipe for lower prices.

That said, copper prices look primed to stay low even if we get a substantial pullback in the US Dollar. A renewed pivot thesis would help—and that is perhaps already here—although those effects are more likely to be felt in the equity and bond markets versus physical demand for a commodity such as copper. That likely won’t happen until the global economy sees a substantial rebound, preferably one driven largely by China.

The DXY Index pulled back to a major trendline that has gyrated between offering support and resistance going back to May. The pullback is overdue but may have more room to run when looking at the DXY’s RSI and MACD oscillators. The RSI crossed below its 70 mark, and MACD is now declining, on track to see a signal line crossover. Some consolidation may be in order versus a broader pullback, however, but if prices continue to descend, the June 2002 high or the 20-day SMA offers tangible targets for bulls to regroup.

The World Bank’s 2023 China GDP forecast sees year-over-year growth falling to 4.5% from its previous 4.8% forecast. However, a major policy shift in China’s Covid strategy may spark some optimism, which would spark the first leg of a broader rally, with follow-on depending on improving real-time economic indicators, as traders would likely be cautious of a reversal in that policy. 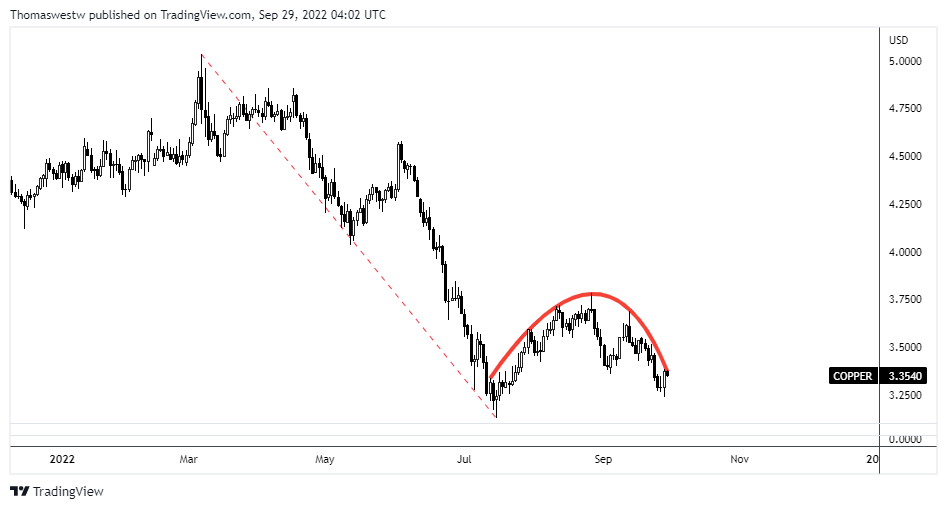 The technical outlook doesn’t give copper prices a much better chance. A reverse Cup has formed, although it still lacks a handle. A rebound would bring that development afoot, however, which may lead to a subsequent selloff. Otherwise, prices may just continue lower as they have done since the August swing high.